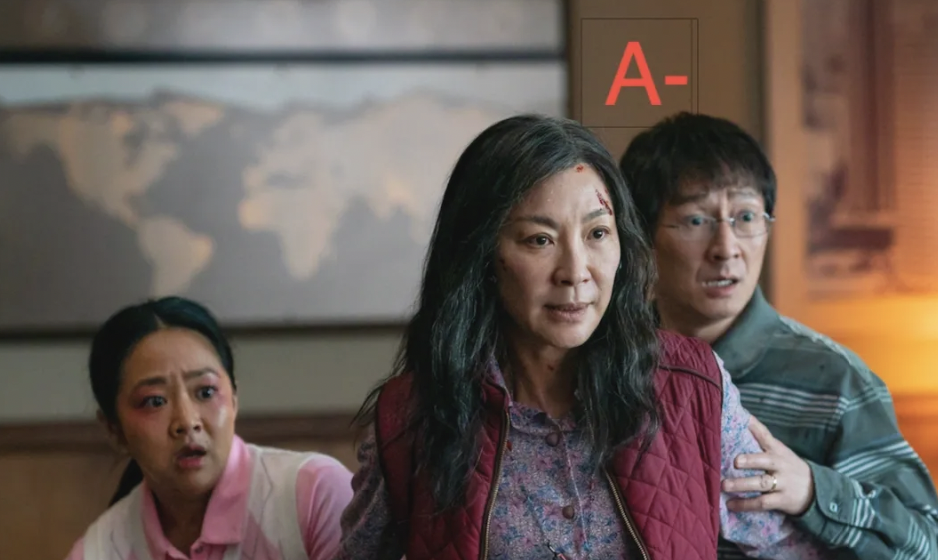 “Evelyn” (Michelle Yeoh) is married to “Waymond” (Ke Hu Quan). Her daughter is “Joy” (Stephanie Hsu). Her father is “Gong” (James Hong). Evelyn is an aging Chinese coin laundry store owner. She and her family immigrated to the US. After years of struggles leading to a harsh financial audit, she discovers that she is at the heart of all the realities of the multiverse and that she alone has the power to stave off the forces of evil and prevent the collapse of the entire universe.

All of this multiverse talk is getting serious, so let’s stop to emphasize a few fun facts; first, an alternate version of her husband comes back to interrupt her audit to inform her of her prominence in the cosmic scheme of things. Quan, who plays her husband in all realities, is that same kid known as “Shortround” in Indiana Jones and the Temple of Doom (1984) and “Data” from The Goonies (1985). Yes, it’s been that long. The auditor is “Deirdre” (Jamie Lee Curtis), a shrewd, by-the-numbers IRS auditor who, despite overstepping the bounds of her character on more than one occasion, manages to add a genuineness to the film that otherwise wouldn’t have been present. She is a priceless addition here.

Evelyn doesn’t know it yet, but she soon discovers that her own daughter, in another incarnation, is the greatest threat the world has ever known. Both mother and daughter can harness the powers of their identities across realities and essentially adopt their abilities as needed. In one life, Evelyn is a master chef, and in another, a martial arts grandmaster. So you can see where the entertainment value of quantum physics-based sci-fi combined with action can be put to good use. And there is something to be said for a film that includes a lesbian couple who come from a world where everyone evolved with useless hot dog hands and who have to use their feet for everything. Did I mention it relies heavily on humor as well?

From the sound of things, there is really no way to get such a mess of a plot right. But EEAAO manages to serve it up like a pizza party where everyone gets plenty to eat and even more to take home. The film is co-written and directed by Dan “Swiss Army Man” (2016) Kwan and Daniel “The Death of Dick Long” (2019) Scheinert who have been behind various short films and special productions thus far. They unite here to give us something much bigger.

At times touching, “lol”-funny, and at other times ridiculous, there is a lot here for everyone. Looking past the overly dramatic and raunchy excursions, EEAAO will appeal to younger audiences more so than older ones, but it is for sure the overstimulation event of the year. And quite honestly, there is nothing else like it!

"All truth passes through three stages. First, it is ridiculed. Second, it is violently opposed. Third, it is accepted as being self-evident."

"The universe reveals its secrets to the still mind."

"Nothing is more logical than persecution. Religious tolerance is a kind of infidelity."