Joe E. Holman is a Gen-Xer with a unique career path, having been a minister, a car salesman (much the same thing), a writer, and business manager. 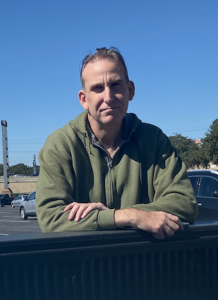 A Risk Manager by day and angry film critic and survivalist gear reviewer by night, Joe has been frothing at the mouth over cinema and other things since 2002, and in that time, has amassed a decent viewership across three different sites.

In 2002, Joe wrote “Laws for Living: A Collection of Facts, Tips, and Truths for Everyday Life.” And in 2003, his first real claim to Z-list celeb status came from defecting from Christian fundamentalism and writing a book about it (the now out-of-print “Project Bible Truth”).

In 2013, his weight loss of 173 lbs in 11 months became the new thing, with a YouTube channel, OMAD Revolution, set up to tell the story. Joe’s often somber siren songs of wisdom come from many sources and are often rooted in dark origins. But somehow someway, the overriding message ends up being positive.

In a way, Joe is the wannabe villain, but hero despite himself. He is Jonah – running from God, but is brought back again – but ultimately finds himself amidst the chaos. And the final chapter for Joe…well, it hasn’t been written yet!

"All truth passes through three stages. First, it is ridiculed. Second, it is violently opposed. Third, it is accepted as being self-evident."

"The universe reveals its secrets to the still mind."

"Nothing is more logical than persecution. Religious tolerance is a kind of infidelity."